The ??? Mouse is a fan made antonigist made by TheDeadBody in Abandoned Discovery Island.

He looks a Mickey Mouse (mostly The Face) suit that lacks a pupil in his left eye, and has one at his right eye. He also has some blue shorts, along with yellow shoes.

He will start in the Storage Room, starting at night 4, in a box. He will come out of the box, and then will go to the Staff Area, and then he will move to the Meat Freezer, and will hold the cleaver in a rare occasion, the Lounge, and then the office. Shutting off a camera or hiding under the desk would never work on him, the only option on what to do on him is shutting off the power. If you don't shut off the power, and even shut off a camera or hide under the desk, he will kill the player with a killscreen, crashing the game immediately. 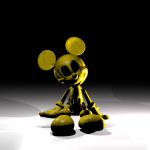 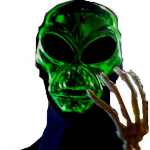 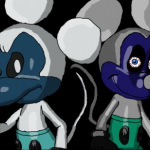