Abandoned: Discovery Island RP Wikia
Register
Don't have an account?
Sign In
Advertisement
in: Fan Made Characters, Fan Made Demons, Ghosts,
and 6 more

View source
watch 01:54
Obi-Wan Finale - The Loop
Do you like this video?
Play Sound
Unsettling

You're next. -Murder Suit

Reason: His death screen, teaser or hallucination may look unsettling to some people

Abandonment is a fan-made character in Abandoned: Discovery Island.

Abandonment is fan-made character in Abandoned: Discovery Island. Abandonment is the physical manifestation of the abandonment of the suits. All of their angry and sad feelings combined together to create a Mickey Mouse-like ghost.

Abandonment is a completely greyscale Photo-Negative Mickey suit with a dirty texture. His eyes are missing, and the back of his head is visible through the eyes. Abandonment has a white head, ears, arms, torso, and legs. His gloves, face, buttons, and shoes are all dark grey, and his shorts are a light grey.

Abandonment is a very rare character to come across, as he has a very low chance of being seen. When seen, he will be in Character Prep 2, the camera being completely in greyscale. The words "Abandoned by Disney" and "Abandoned by God" will be written sloppily on all of the walls, floor, and ceiling. After this, Abandonment will appear in the office. Abandonment will be leaning over the desk, twitching and making an undiscernible sound. During this, hallucinations will flash on screen briefly. The player can get rid of him by either flipping up the camera once again, or hiding under the desk. Failing to do so will result in a death screen that will crash the game. 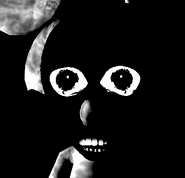 The first hallucination image of Photo-Negative Mickey with a distorted visage inside of his mask.

The second hallucination image of Photo-Negative Minnie hanging from the ceiling in Character Prep 1. 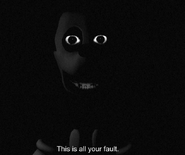 The third hallucination image of The Face. Human eyes and teeth can be seen through his mask.