Abandoned: Discovery Island RP Wikia
Register
Don't have an account?
Sign In
Advertisement
in: Fan Made Characters, Fan Made Suits, Fan Made Toons,
and 13 more

Acephalous Prop is a fan-made prop in Abandoned: Discovery Island

Ace's body isn't withered but does have a hole in his chest, with a large spike protruding through him. A smaller spike is attached to the larger one, which holds the head of Acephalous. The head has a glowing orange eye indicating his soul is still trapped inside his suit.

Acephalous' body is ripped apart by the arms and torso, with a large spike protruding through his torso and out of his neck. A smaller spike is next to the large one, where his head is impaled on. A small orange pupil is located in his right eye socket, meaning that his soul is still trapped inside of the suit. 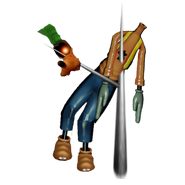