Bloodshattered Mickey is a unofficial antagonist in Abandoned Discovery Island. It's a demonic poltergeist (meaning noisey spirit) that formerly was a human.

The backstory of Bloodshattered Mickey is that it was once a normal human man named Lynch; who used to work at Discovery Island.

He retired his career when having a close call with one of the toons and suits around the spaces. 7 years later he returned to the now "abandoned" Discovery Island, to figure out the cause of his experience 7 years ago.

Lynch thought of cleaning and repairing one of the Photo Negative Mickey suits, so he approached it with caution and began cleaning the dirt from it. During the cleaning, the suit suddenly springs to reality and attacks Lynch, killing him in a gruesome way, and putting his body into a spear Mickey suit.

The Mickey suit was soaked in Lynch's blood after the intense shoving; in which some parts of the limbs, ears and eyes start to break and shatter out. The PNM suit had a tag hanging out of it's ear which spells "Jake" on it, meaning Jake was in the suit.

10 years of decay and suffering, Lynch now became Bloodshattered Mickey; who's hungry for payback and torment on Jake (with wicked demonic intentions.)

It's unknown why Jake killed Lynch while in a PNM suit, maybe it is to do with Jake taking revenge on the suits and toons that torment him throughout the night, so he impersonates Photo Negative Mickey so that when a toon or suit wanders along, he tears them apart. Lynch was probably mistaken for a toon or suit; which led to Jake taking his life away.

When Jake realizes the being he killed was a human, he stuffed his body in a spear Mickey suit that he found so no one else finds out. This makes Lynch's ghost very angry for revenge.

It appears to look like a hideous monster; It is a bloody soaked 'Normal Mickey' costume. It has rips everywhere (in the arm and legs), it's left ear is missing a few pieces and is bent up to the left side, it's missing a left arm (ending in a large chunk rip), its left eye is missing and the right eye is a big ripped hole, its missing two of its shoes, its mouth is completely an enormous ripped hole, half of it's glove is missing, and it's right ear displays a large right semi circular cut.

The only behaviour of this poltergeist ghost is its "disembodied" voice tactic that it uses on the player to warn their repetitive usage of movement around 2AM on Night 5. Bloodshattered Mickey's voice says this "I know how you feel Jake." It will continue to say this as it increases in volume if the player ignores the voice being said.

When the volume's limit is increased, the player will end up in a killscreen by Bloodshattered Mickey. To avoid it's killscreen, the player will have to stay static in the center of the office, That way the voice's volume decreases to the point you can't hear it anymore, and then you go back to normal.

If there's one or more threats in the office, you'll have a chance of 35% of being killed by Bloodshattered Mickey; so be quick.

Bloodshattered Mickey doesn't leave a shade counterpart when the player turns off the power, so you're fine. Hiding under the desk is not a option as the poltergeist can killscreen you from just above your head.

(Spoilers for TWF) down there!!!

Lynch's death was a inspiration from Susan Woodings Death (The Walten Files.)

Bloodshattered Mickey has the ability to manipulate random objects (because it is a poltergeist.) 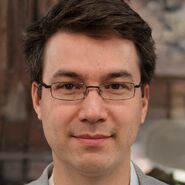 Lynch (Made with This person does not exist.com)
Community content is available under CC-BY-SA unless otherwise noted.
Advertisement