Blotmare Face is a fan-made antagonist in Abandoned: Discovery Island.

Blotmare Face resembles The Face, except he is heavily melted and distorted. Unlike the other Blotmares, his limbs appear to in-tact, the reasons for this is unknown. Blotmare Face's body is covered in dust, and the paint on his body is mixed with other colors, causing a smearing effect. Blotmare Face's ears sustain damage, as it looks like pieces of them were torn off. His head has a large dent in it, as it appears his head is caving in. His eyelids are melted in such a way where he looks like he is angry. His hands and mouth are dripping due to melting. Blotmare Face also lacks eyes unlike his original counterpart.

Blotmare Face starts in Sacrificial Grounds (Page coming soon), where he is not seen on camera until active. He will then have many stages before entering the Office.

When Blotmare Face appears in the Office, the player only has a short window of time to turn off the camera before they are attacked. 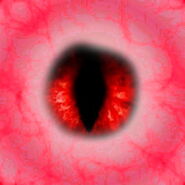