Blotmare Oswald is a fan-made antagonist in Abandoned: Discovery Island

Blotmare Oswald resembles a Classic Oswald Toon, but it heavily melted and broken. Blotmare Oswald's limbs are severely malformed and melted, while the rest of his body is covered in dust. On his chest, and two stubs are sharp spike-like structures (These are common on other variations of Oswald). Along with being covered in dust, his body is dented. He has a large hole in his head, where a glowing pupil is visible. The paint on his body appears to be melted and mixed with other materials due to age. 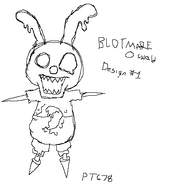 A teaser for Blotmare Oswald featuring one of the original Oswald's quotes.
Community content is available under CC-BY-SA unless otherwise noted.
Advertisement