Red
Clownswald is a Fan made antagonist in Abandoned: Discovery Island.

He resembles Oswald The Lucky Rabbit, However he has a red nose, many scars, and appears to have withered ears, along with a Hand coming out of his chest.

Oswald will randomly appear in the Lounge. Once you lower your camera, he will teleport to the Office, the player must hide under the desk or they will get a death screen, resulting a game over. 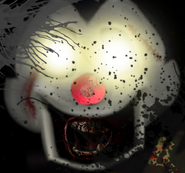