Any night after Night 3.

Any night after Night 3.

Devil resembles a taller, larger Mickey Mouse suit, but is actually a demonic entity taking a deformed shape similar to Mickey Mouse. Devil's body is black, with a dark, blood-red colored face with no visible eyes and an elongated jaw. Devil's shorts and shoes are dark grey, with dark red buttons. Devil's body is covered in various rips and tears, and is missing all of his fingers.

Devil is a one of a time chance easter egg that can be found on any night after Night 3 at any hour. When found, a black sillhouette of Devil will be seen reaching over the desk, with his arms stretched towards the player. While in the office, a quiet sound will begin to play. This sound resembles various pained screams and screeches, and will get louder until 15 seconds passes, where the screen will then turn black. A distorted image of Devil's face will appear on-screen, along with an ear-piercing sound. Various messages will flash on-screen in the following order.

After these messages appear, the game will crash, and a .txt document will appear on the player's desktop. It reads the following:

"So it will be at the close of the age. The angels will come out and seperate the evil from the righteous and throw them into a firey furnace. In that place there will be weeping and gnashing of teeth."

After encountering Devil for the first time, he cannot be encountered ever again. 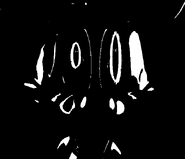 Devil in the office.