Abandoned: Discovery Island RP Wikia
Register
Don't have an account?
Sign In
Advertisement
in: Fan Made Characters, Fan Made Suits, Fan Made Toons,
and 10 more

"Hey Jake, It's Lisa. I wanted to tell you something I would think would be important to you. So uh, you know that headless Goofy thing? Well, it's been doing something strange as of recent. It's been placing the Donald head on-top of its neck, using the Donald head as his head. I hope I was able to explain that good enough. Now we initially thought this wouldn't be too bad, but it seems that when the two are combined together, they gain super great hearing and sight. It's very weird, so just watch out for it. Oh and by the way, hiding won't work like it used to since it has amazing eyesight. Just shut off a camera when you see it, its amplified hearing will alert it away from the office. Alright, see you tomorrow morning Jake. - Lisa, Night 3

Disemphalous is a fan-made antagonist in Abandoned: Discovery Island.

Disemphalous has the exact appearances of Acephalous and Disembodied, nuff said.

Disemphalous acts as both a hostile danger, and an audio danger. Once appearing in the Office, Disembodied's quacks will play, making the other suits move much quicker and erratically. But if the player does not shut off a camera quick enough, they will be jumpscared. 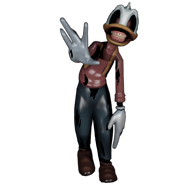