Disney X Also known as " Darkness of Disney" Is a very evil and powerful being and an antagonist in Abandoned: Discovery Island.

According to Walt Disney, he is the most powerful and evil being Jake will ever face. The journal is used to seal him away and to be kept in a safe place which is Discovery Island. God wanted it back to prevent anyone from letting him loose which Jake did. Now he has to do the right thing and hand it back, but it's too late, he has already escape. On X night, he has turn all the suits into Shadow suits And has defeated God and Undying. Now Jake has to save not only the Island but the world from destruction.

He appears on X night after the player gets the True ending and types in "Walt" in the main menu. On this night, Walt will be talking and will be explaining about Disney X. He will appear in all cameras either on the ground or floating in the air. All the rooms including the Office will be in a dark, shadowy aura and will be floating. If Disney X is in the Office, the player must use a special item which is some type of light staff given by Walt to fend him off. Otherwise he will either, disable all cameras for a moment, chain you up to prevent you from hiding, or prevent the power from being turn off, or will kill you. You can only shoot 3 at the time off the staff before recharging. For the shadow suits which are more aggressive than the regular suits, the player must do the same thing they did to stop them or they will kill you or will prevent you from shutting off power, speed up the suits, or hide depending on what suit they are. After you made it to 6 am, a cut scene will show. It shows Disney X saying "I will not let you stand in my way, If True Mickey and the worthless suits can't stop you, then I will. I will take over this world. As soon as he is getting close to the player, Walt Disney appears and grabs him. He then yells at the player to use the journal to seal him in. After the player aims at Disney X and then sucks him in, he is sealed and the island is turned back to normal and so are the suits. God and Undying are back to life. Walt then says that you have saved the Island and the world from destruction. He then explains that Disney X is from another universe where True Mickey is. He is the evil side of Disney and True Mickey was his main star. He came here to earth years ago and was sealed and the journal was buried in Discovery Island where it was abandoned. God then grabs the journal than tells Jake thank you and to never use the journal again. She then says the suits also thanked him for saving them and turning them back to normal. She then disappears then Walt says that he must go as well and he then says bye to Jake and thanking him for doing the right thing. Then the player gets the best ending.

Disney X can appear on any locations.

A teaser for Disney X. 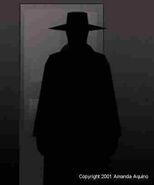 A concept for Disney X's promo. (For now.)
Community content is available under CC-BY-SA unless otherwise noted.
Advertisement