Distorted Mouse
Eustace is a fan made antagonist in Abandoned: Discovery Island.

Eustace starts in the Broadcasting Room on Night 5 with Suicide Mouse, when he activates, the television on the floor to the very left of the room will turn on with a fuzzy screen, playing a broken music box, he then moves to, Character Prep 1, Staff Area, Meat Freezer, then finally into the Office.

The appearance of Eustace is almost like a grayscale version of the classic design of Goofy, except parts of his body seem cut up, and sewn together.

When Eustace activates, he starts in the Broadcasting Room, then moves to Character Prep 1, Staff Area, Meat Freezer, then into the Office, where the player will have to shut off a camera or he will kill them. When moving he will say one of the following : 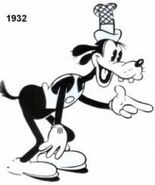 a picture of Eustace in fnati room zero
Community content is available under CC-BY-SA unless otherwise noted.
Advertisement