Evil Mouse is a antagonist in Abandoned: Discovery Island. He is a cameo of George.

He is a black trophy of Normal Mickey, but his face, hands, buttons and pants are all green. He has red eyes. In his jumpscare, he has no eyes in his eye sockets surrounding brown spikes. More info in Behavior.

He will become active on the Dread Night. The power will be off throughout the whole night. The ponies from MLP: E.G. will be active and Evil Mouse. The ponies will enter the office but however, he will just sit down at the left of the sign. The ponies will make roaring noises but he will make screaming and growling noises. During the night, if the player hides for too long, he will attack the player instead of Slester. His jumpscare consists of him staring at the player with empty eye sockets surrounding brown spikes while glitching. 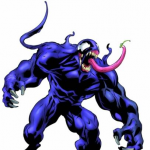