Hide under the Desk

Giulia is an Unofficial Antagonist in Abandoned: Discovery Island.

Giulia's appearance stays the same, except that her skin is grey, her hands are missing and her face has been distorted.

She will start at Night 5 in the Broadcasting Room and make her way to the Office. When she is in the Office, hide under the Desk otherwise you will get jumpscared.

She starts at Night 5. 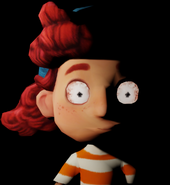