Husk Photo-Negative Mickey (A.K.A HPNM)resembles a dirty, heavily deformed Photo-Negative Mickey suit. HPNM's ears are completely missing, and its eye sockets and mouth are widely stretched. HPNM is missing nearly the entirety of his left arm, and his right hand is severely disfigured, as it is missing all of its fingers. HPNM lacks any legs, and is always seen in a slouched position.

HPNM is a harmless easter egg that can be encountered at any night, but is very rare to see. When he manifests, he can be seen at the back end of the office near the Discovery Island sign, laying in a slumped position. The player can get rid of him by doing any of the following: 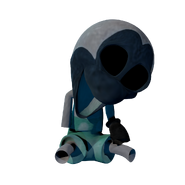 Husk Photo-Negative Mickey in the Office.
Community content is available under CC-BY-SA unless otherwise noted.
Advertisement