We're Getting Mutants in the MCU - The Loop

Ignited Goofy appears In The Land Of Disney as a Antagonist.

Ignited Goofy looks similar to his normal counterpart, but he has huge glowing red marks on his legs. Red stuff can be seen in the shoulder holes, he also lacks his arms

He appears in Meet and Greet A before moving to Abandoned Hallway C, Male Bathroom and Abandoned Hallway B before appearing in the office. The player needs to hide in the Backroom otherwise he will kill the player. 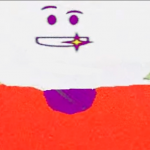