Lamented Face is a fan-made antagonist in Abandoned: Discovery Island.

Lamented Face starts in Character Prep 2 off camera. Once active, he will be seen crawling out of the window. He will then appear on the Roof, where he is seen in the background attempting to crawl into the vent system. He will then come to the Office, where he is seen peering out from the ceiling. While he is in the Office, the lights will begin to flicker. The player must shut off the power to get rid of him. Failing to do so will result in a jumpscare and game over.

After the events of Abandoned: Discovery Island, Lamented Face and all of the other suits were moved to a hidden warehouse by the SSA. Greg tasked Lisa with a week long night shift at the warehouse to keep the suits from escaping. Lisa experienced a tragic and horrifying week at the warehouse, the suits attempted to attack and kill her, and even trapped her in an underground area, where more suits attempted to kill her there. After Night 5, Lisa had enough of the suits, and burned the warehouse down, taking the suits with it and sending them to the deepest darkest depths of Hell forever.

Lamented Face does not make an appearance until 6AM of Night 3, where Lisa is trapped in an underground area of the warehouse. This underground area is a maze of jail cells, rooms, and hallways. To escape, Lisa must find a key to unlock a door to get back on the first floor, with Lamented Face trying to stop her in the process. Lamented Face can randomly appear in rooms, and if Lisa stays for too long, he'll attack her. Lisa can stun Lamented Face by repeatedly flashing her flashlight at him to stun him in place.

After escaping, Lamented Face begins hunting down Lisa on Night 4, where he will emerge from a hole in the floor in Storage Room 2. He will then move to Storage Room 1, and then the Shipping Dock, and finally the Vent System. Turning on the heat will cause Lamented Face to back out of the vent.

Lamented Face can also take another path to the Office through Storage Room 2, Staff Hall, then Office Entrance A. Closing the industrial door will not work on Lamented Face, as he enters the room quick enough to escape the door. He will then enter the office, where Lisa must hide inside of the locker behind her. If Lisa takes too long to enter the locker, Lamented Face will force open the locker door and kill Lisa, resulting in a game over. 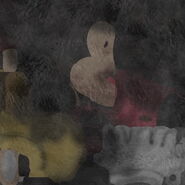