View source
watch 01:54
Obi-Wan Finale - The Loop
Do you like this video?
Play Sound

Lamented Mickey is a fan-made antagonist in Abandoned: Discovery Island.

Lamented Mickey is a variation of a normal Mickey Mouse suit. Lamented Mickey is a very broken and destroyed suit, his head being severely dented and bent, with both of his ears sustaining damage. His jaw is stretched slightly, and he is missing his pupils. His body is thin and bent, as well as his arms and legs. He is missing his right arm entirely, and the buttons on his shorts are rotted away. Lamented Mickey's shoes are almost completely black with mold and dust, in fact, his entire body is covered in filth, almost making him entirely dark.

While the other suits where taken from Discovery Island and transported to a classified warehouse owned by the SSA, a strange, damaged Mickey Mouse suit was found within a crate in one of the storage rooms. The SSA was unaware of the suit's presence until Lisa's nightshift began. The Mickey suit crawled out of the crate, and began hunting Lisa down. Looks like another demon has joined the army of angry souls. 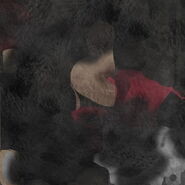