Lamented Minnie is a fan-made antagonist in Abandoned: Discovery Island.

Lamented Minnie is a distorted and broken version of Minnie Mouse. She's missing her left ear, and a large chunk of her bow. Her face is heavily distorted, as she's missing a nose, and her face is bent into a malicious hate-filled smile. Her dress remains undamaged, but her legs are dented and caved in in various places. She is missing her arms, and they are replaced with nubs.

After the events of Abandoned: Discovery Island, Lamented Minnie and all of the other suits were moved to a hidden warehouse by the SSA. Greg tasked Lisa with a week long night shift at the warehouse to keep the suits from escaping. Lisa experienced a tragic and horrifying week at the warehouse, the suits attempted to attack and kill her, and even trapped her in an underground area, where more suits attempted to kill her there. After Night 5, Lisa had enough of the suits, and burned the warehouse down, taking the suits with it and sending them to the deepest darkest depths of Hell forever.

Lamented Minnie starts on Night 4, where she is seen lying on the floor in the Janitorial Closet. When active, she'll stand upward, and will be facing the doorway. She will then move to the Staff Hall, where she is seen standing in the corner. She will then move to Office Entrance A, where Lisa must close the industrial door to the Office using a button on the camera system. If Lisa does not do this in-time, Lamented Minnie will enter the office. When in the office Lisa must use her camera to blind her with the flash, this will cause her to get disoriented and leave. Not only this, she can also take a path to the Office through Office Entrance B. 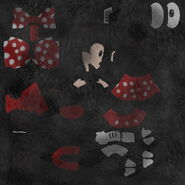