After the events of Abandoned: Discovery Island, Lamented Suicide Mouse and all of the other suits were moved to a hidden warehouse by the SSA. Greg tasked Lisa with a week long night shift at the warehouse to keep the suits from escaping. Lisa experienced a tragic and horrifying week at the warehouse, the suits attempted to attack and kill her, and even trapped her in an underground area, where more suits attempted to kill her there. After Night 5, Lisa had enough of the suits, and burned the warehouse down, taking the suits with it and sending them to the deepest darkest depths of Hell forever.

Lamented Suicide Mouse starts on Night 3 in the Television Room, where he is seen sitting up against the wall. When active, he is seen standing up, facing the back wall. When he is active, the televisions in the Television Room all have bright white screens. He will then move to the Main Area, where he is seen standing in the doorway. He will then move to the Shipping Dock, where he will enter the vents and appear on the Vent System camera. where Lisa must turn on the heat to cause Lamented Suicide Mouse to back out of the vent. If Lisa does not do this in time, he will drop from the ceiling and kill her, resulting in a game over. 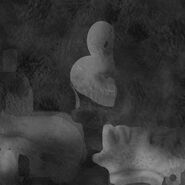