Mater is a Fanmade character in Abandoned: Discovery Island

He looks the same as in the movie Cars, but he is melting in a few areas, he has a flat tire, he has a slight grin on his face, and his eyes are colored Red and Black.

He looks the same as in the movie Cars, But he is melting in some places, his eyes are black instead of white, his pupils are red instead of black, and he has a slight grin on his face.

Mater Starts In the Storage Room, Then he goes to the Staff Area, Meat Freezer, Then the Lounge, Then the Office, The player must shut off a camera to get rid of him, neglecting or failing will make him jumpscare the player. 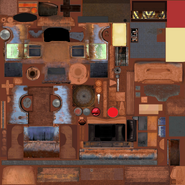 A early version of Mater

Mater in the Office

Mater in the Meat Freezer

Mater in the Storage Room.
Community content is available under CC-BY-SA unless otherwise noted.
Advertisement