Abandoned: Discovery Island RP Wikia
Register
Don't have an account?
Sign In
Advertisement
in: Fan Made Characters, Fan Made Suits, Fan Made Toons,
and 4 more

Anywhere on the Island.

Anywhere on the Island.

Mick.wrm is a fan-made antagonist in Abandoned: Discovery Island.

Mick.wrm's appearance is completely unintelligible, as its whole body is glitched and distorted, only a Mickey-like shape can be seen. Mick.wrm's new appearance is made up of multiple colors, with pixel drag and interlace lines.

Mick.wrm is a regular Mickey Mouse "Toon", but has darker colors, glitched parts, a ripped eye which has a human eye inside and blood splatters.

His mechanic is that he acts as a computer virus on your cameras. He will appear in any room on the island and if you don't click away fast enough, he will corrupt your monitor and you will have to wait a limited time before they are usable again.

Mick.wrm can start at any room on the island building.

EDIT 7/10/21: A new image was made for this character, and the old one was placed in a gallery. Another new addition is an originally made corruption sound.

The Despair is just begin.-Zardy99's Amalgamation

Reason: His old look is disturbing to some people 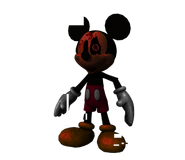 His new appearance.
Community content is available under CC-BY-SA unless otherwise noted.
Advertisement