Whoa there! Read this before proceeding on!

This suit represents as the original Mickey Mouse, one of Disney's main characters and also Minnie Mouse's boyfriend. In Abandoned: Discovery Island, he is a suit based of that character, alongside Minnie Mouse, he is the main major antagonists and suits in Disneyland.

Past Mickey (also known as Mickey Mouse) is one of the main antagonists in Five Nights at Treasure Island: Found, Alongside Photo-Negative Mickey, he's actually Photo-Negative Mickey, just with his colors inverted or normal, and he's MickMick from the past, and he's Suicide Mouse, but not gray-scale and non-eyeless. Past Mickey was once just a regular Mickey Mouse suit that was a mascot to the park Treasure Island when it was just normal, but then after blowing $30,000,000 dollars, Treasure Island was abandoned, and Past Mickey went upset, he didn't meet anyone new, not even a human. But on the 6th Night, he met Jake on his first day of his job.

Mickey Mouse appears to be the iconic character in Disneyland, and he has incarnations of any of the suits, except for humanoids, especially when he is compared to Photo-Negative Mickey, MickMick, Suicide Mouse, True Mickey and everyone else.

As it's name implies, the costume is actually a Disneyland park Mickey Mouse character costume with Normal coloring. It is unknown why it was coloured such everybody Like It contains all of the Mickey Mouse features, such as circular ears, a small pointed tail, a pointed nose, a large grin, buttoned pants, shoes, and gloves. If reversed, it shows Mickey Mouse's Photo-Negative colors.

He Starts at CAM 3. His Timer Starts in 3AM, if the Character Prep is empty. He Goes to the Broadcasting Room, Lounge, Storage Room, Meat Freezer and Finally enters The Office. And everywhere he goes to the rooms it turns the colour of the room to Photo-Negative.

Mickey Mouse starts his route in Character Prep 1, along with Photo-Negative Mickey and Disembodied. But he remains Off-Camera, which when he comes out or either starts moving, he can be seen standing at the left side of the camera, but not facing the camera, as he will be in that pose of facing the left doorway. He Goes to the Broadcasting Room, Lounge, Storage Room, Meat Freezer and Finally enters The Office. And everywhere he goes to the rooms it turns the colour of the room to Photo-Negative.

He activates on Night 6 or on the Good Ending , He Acts Like Photo-Negative Mickey , Past Mickey starts at Character Prep 1 along with Disembodied. He is initially seen standing about in the camera, by showing himself to the player. This can help the player prepare for him. He appears in some of the cameras, cameras not on his path being Storage Room. He can next go to the Staff Area , then he goes to the Meat Freezer , he can go to the Bathroom or the Lounge and then he'll appear at the Office , if he's at the Office , he won't kill the player , he'll offer a deal if he can escape Treasure Island with him , if the player agrees , then that's when the game will end and the screen will say "Good Ending".

Mickey Mouse activates on Night 6 alongside Photo-Negative Mickey, Oswald, Disembodied, The Face, Suicide Mouse, MickMick (Past Mickey's truly MickMick from the past), Minnie Mouse and everyone in the Treasure Island. Past Mickey will behave the same way that Photo-Negative Mickey acts like. Mickey Mouse (like Photo-Negative Mickey) will start in Character Prep 1 of course. By being somewhere behind the camera, then he will show himself to the player, giving the player preparation. Unlike most other suits and unlike most suits alongside himself. He will take a completely simple path to the Office, rather that walking around Treasure Island at random intervals, but however that will sometimes happen, Past Mickey will occasionally appear about in all of the cameras in the monitor. However, he will then go to these cameras that are including : CAM 01, CAM 02, CAM 06, CAM 07, CAM 08, CAM 09, CAM 10, CAM 11, CAM 12, CAM 13, CAM 14, CAM 15, and after being in multiple cameras, he will eventually arrive in the Office within his arms outstretched like he's jump-scaring. The player must pull off the monitor and shut off any of the cameras to get him out of the Office or lure him away. Or the player can either hide under the desk, which can ONLY give the player 50/50 shot and 50/50 chance of surviving and luring him out. But if the player ends up Failing or Neglecting to take any of these actions in time, Mickey Mouse will mischievously attack the player. Mickey Mouse will attack the player the next time the monitor with the cameras in pulled or put down, or if the player hides under the desk for a small time, or if the player doesn't do anything at all, just being idle.

While he's moving by being active on Night 6, (as the Good/Alternate Ending), he says these words by occasionally talking in his original echoed voice, by being heard by the player by him saying these phrases including :

Past Mickey acts and behaves Like Photo-Negative Mickey and like him, Past Mickey begins or starts in Character Prep 1, then he moves to Staff Area, then he will enter the Meat Freezer, then he'll go to the Lounge, however, on a sometime chance, and then he will enter the player's Office. However, he will then go to these cameras that are including : Staff Area, Meat Freezer, Lounge, Broadcasting Room, Character Prep 2, Janitor's Closet, The Roof, Caverns Entrance, The Stairway, Break Room, Depths, Entrance Room, and after being in multiple cameras, he will eventually arrive in the Office within his arms outstretched like he's jump-scaring the player.

Mickey Mouse is an animated character created by Walt Disney and Ub Iwerks in 1928. He is an anthropomorphic mouse characterized as a cheerful, yet mischievous underdog who must rely on his quick-wit and athleticism to overcome adversity. Estimated as standing 2' 3" (68.58 centimeters) and weighing 23 pounds (10 kilograms) Mickey is easily identified by his round ears, red shorts, white gloves, yellow shoes, and a falsetto voice. His speech is typically infused with 1930's slang like "swell" and "gee".

Inspired by comedians and swashbucklers from the silent film era[2][3], Mickey made his first public appearance in the short film Steamboat Willie, on November 18, 1928. His simplistic, "rubberhose" design allows for both relatable emotion, as well as exaggerated physical gags. Mickey’s versatility, meanwhile, enables him to slip into any profession, location, or time period, while maintaining his core characteristics. Many cartoons see Mickey embarking on fantastical adventures, most often to rescue his girlfriend Minnie Mouse from the clutches of Peg-Leg Pete. In addition to Minnie, Mickey is often accompanied by his pet dog Pluto, and best friends Donald Duck and Goofy.

Mickey steadily branched into other mediums over the years, beginning in 1930 with a comic strip by cartoonist Floyd Gottfredson. In 1940, Mickey made his feature-length film debut with Fantasia, for which he was given his modern redesign by animator Fred Moore. In the 1950’s, Mickey became a television mainstay with the premiere of The Mickey Mouse Club, as well as an icon for the Disney theme parks with the opening of Disneyland. Mickey has also featured prominently in critically acclaimed video games such as 1990’s Castle of Illusion and the Kingdom Hearts series.

With a lovable personality and imaginative cartoons, Mickey rapidly rose to the pinnacle of American culture, becoming the most popular and recognizable cartoon character in the world, and the prime influence of following cartoons.[26] For all his acclaim, none have viewed Mickey more fondly than Walt Disney, himself. The two were widely regarded as "alter-egos" by peers and historians,[27][2] a perception supported by Walt originating Mickey’s voice. Disney once attributed his success to the advent of Mickey, famously proclaiming that, “it was all started by a mouse”.

As its most famous character, Mickey serves as the mascot of the Walt Disney Company. He has appeared in over 130 films, for which he received numerous accolades. In 1932, Walt Disney was presented an honorary Academy Award for the creation of Mickey Mouse.[28] In 1978, Mickey became the first animated character to receive a star on the Hollywood Walk of Fame. His 3-circle silhouette serves as the logo for most of Disney's subsidiaries, save for the ones that don't carry the 'Disney' or 'Walt Disney' label.

Mickey's occupational status is dependent on the story, but he is usually portrayed as a jack-of-all-trades, working as anything from a steamboat deckhand to a sorcerer's apprentice. The most recurring employer of Mickey's is the Ajax Corporation, where he has worked alongside his best friends, Donald Duck and Goofy. Ajax consists of a variety of odd jobs (ghost exterminators, car washers, rollercoaster painters, etc.) and most of Mickey's assignments end up in failure due to his and his team's incompetence. In comic stories, Mickey has frequently been portrayed as a detective working closely with his friend Horace Horsecollar and the Chief of Police, Chief O'Hara.

Though not for pay, Mickey has been a regular contributor to his local orphanage—which houses hundreds of nameless mice children. With help from Minnie, Donald and other friends, Mickey has organized numerous benefits for the orphans such as picnic outings and theatre shows. In some cartoons, he and Pluto have even welcomed the orphans into their home.[31]

In some continuities such as that of Darkwing Duck, A Goofy Movie, and numerous meta Disney productions like House of Mouse, Mickey is portrayed as an A-list celebrity made famous by his theatrical cartoon shorts, which are said to be based on real events in his life.

Concerning his in-universe age, Mickey is depicted as being relatively young. The official character training video for Disneyland (recorded in the 1970's) describes him as "an average young boy of no particular age."[32] 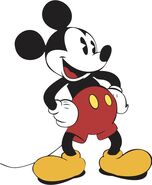 Mickey mouse's jumpscare
Add a photo to this gallery

Headless Mickey In The Main Menu.

Flesh Mickey in the Office.

Mickey Mouse In The Staff Area.

Mickey Mouse walking past In The Meat Freezer along with Goofy's head.

Mickey Mouse In The Bathroom With Acephalous/Goofy's body.

Mickey Mouse In The Staff Lounge.

Mickey Mouse In The Left Side Of the Office.

Mickey Mouse In The Right Side Of the Office.

Mickey Mouse's jumpscare underneath the desk.

Texture of working in FNATI as the unfinished and finished work of Mickey Mouse, Goofy, Donald Duck and Minnie Mouse.
Add a photo to this gallery
Retrieved from "https://abandoned-discovery-island-rp.fandom.com/wiki/Mickey_Mouse?oldid=33472"
Community content is available under CC-BY-SA unless otherwise noted.