"Hey Jake! It's me, Lisa. Greg told me you were doing great so far, so keep up the good work! Eh, Oh yeah, have you heard of the new line of suits we ordered? Yeah, they're going to a brand new Treasure Island location in Alabama. If you switch to the Character Prep 2 camera you'll see a new Mickey suit on a table, looks pretty sweet right? They're very shiny and made with premium materials. They even are built with brand new articulated fingers and movable eyes! They costed a ton of money, yeah, but I'm sure they'll be worth it. Anyway, this suit shouldn't be an issue, we're just keeping it here until tomorrow since we couldn't fit it in with the other supplies we transported today. Good luck Jake!" - Lisa, Night 3

New Mickey is a fan-made antagonist in Abandoned: Discovery Island.

New Mickey appears to be a normal Mickey Mouse suit, but appears to be slightly stylized. The suit is shiny, and appears much more flexible and articulated.

New Mickey can take an alternate path after entering the Main Hall, where he may enter the Employee Lounge instead of the Office Entrance. New Mickey will be seen standing near the open air vent (indicating that he will enter the vent). After this, he will then be seen with his legs and tail sticking out of the vent entrance. Soon after this, the room will be empty again, and New Mickey will soon enter the Ventilation camera. In the vent camera, the player must use the vent snare in order to keep New Mickey from killing the player. If the player fails to do this, the player will be killed by New Mickey.

New Mickey in FNaTI: RTM moves slowly, and is the first suit that activates in said game. 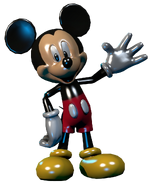