Nightmare Disembodied is a fan-made antagonist in Abandoned: Discovery Island, and PlushTube's version of Nightmare Before Disney.

Shutting off a camera.

Nightmare Disembodied's mechanics are the same from Abandoned: Discovery Island, however, he starts in Channel 02, where he is seen laying on the floor next to a broken shelf. After all of his stages and he appears in the Office, the player must shine their flashlight on him to cause him to go away. Nightmare Disembodied's sound will cause the other Nightmares to move quicker. 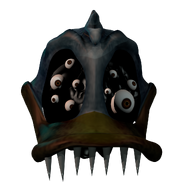