Abandoned: Discovery Island RP Wikia
Register
Don't have an account?
Sign In
Advertisement
in: Fan Made Characters, Fan Made Suits, Fan Made Toons,
and 11 more

Spike Room (cuz why not)

CrimTheMonkey
Nightmare Face.exe is a fan made prop in Abandoned: Discovery Island and can be also used in Crim's cancelled series called, Lincoln Loud.exe.

He look similar to Nightmare Face, but he lacks his eyes and legs, he also looks like a scarecrow, and doing a T-Pose. 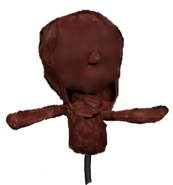 The original Nightmare Face (The creator's favorite character) from Nightmare Before Disney.
Community content is available under CC-BY-SA unless otherwise noted.
Advertisement