Nightmare Face is a fan-made antagonist in Abandoned: Discovery Island, and PlushTube's version of Nightmare Before Disney.

Nightmare Face is a heavily distorted version of The Face. His entire body is wrinkled and dirty, with his hollow eye sockets bent into a permanent "angry" expression. His lower jaw is slightly stretched, and his top jaw is lined with rotten razor sharp teeth. Nightmare Face's left ear is ripped, and his finger tips have long claws emerging from them. However, there's one key difference between Nightmare Face, and his original counterpart. Nightmare Face's skin is a sickly grey color instead of tan.

Nightmare Face has a rare chance of appearing on Night 4. He is not seen on-camera in Character Prep 2, until he becomes active. When active, he is seen crawling out from underneath the table. He will then move to the Staff Area, where he is seen on the floor, staring into the entrance of the Meat Freezer. When in the Meat Freezer, he is seen laying against the far end wall, staring into the camera. He will finally enter the Office, where he is seen leaning over the desk with his hand reaching towards the player. The only way to get rid of him is by shutting off the power. Nightmare Face moves very slowly, but also silently, forcing the player to keep track of him. 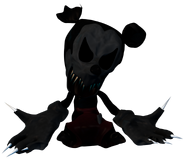