Nightmare Photo-Negative Mickey is a fan-made antagonist in Abandoned: Discovery Island, and PlushTube's version of Nightmare Before Disney.

Nightmare Photo-Negative Mickey has a rare chance of appearing on Night 4, when active, he will be seen in the Caverns Entrance, standing at the back end of the room, staring into the camera with his head slightly tilted to the left. He will then move to the Staff Area, where his whole head will take up the camera's view, with his eyes only being seen, along with the silhouette of his head. He will then move to the Meat Freezer, where he is seen standing next to Goofy's head, staring into the camera. He will finally move to the Office, where he will be seen standing in front of the door on the right side of the room. The player must get rid of him by shutting off the power. Nightmare Photo-Negative Mickey moves very slowly, but also silently, forcing the player to keep track of him. 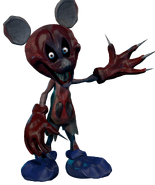 A teaser featuring him. 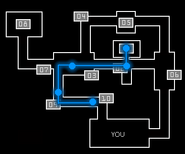 An image of the map system of NBD, along with his path.