Abandoned: Discovery Island RP Wikia
Register
Don't have an account?
Sign In
Advertisement
in: Fan Made Characters, Fan Made Suits, Fan Made Toons,
and 9 more

Purple is a fan-made antagonist in Red Oddities

Shut off a camera.

Purple is a heavily distorted version of Mickey Mouse, much like the other Oddities. Purple's body is entirely colored... well... purple. His head is slightly distorted, with his eyelids, smile, and nose is elongated. His lower body is wide and stretched, and his arms are lanky. He has large hips, and his shoes are elongated.

Purple starts in CAM1, where he is not seen on-camera until he is active. When active, he is seen standing in the middle of the room, partially covered by darkness. From here, Purple will either take a path to the Office through either CAM 3 or CAM 4, it is randomized each time. When he appears in either doorway, the player must shut off a camera to get rid of him. After this, he will reset in CAM 1. 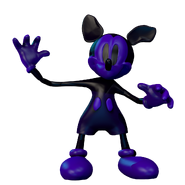