Abandoned: Discovery Island RP Wikia
Register
Don't have an account?
Sign In
Advertisement
in: Fan Made Characters, All Characters, Male,
and 13 more

TheDeadBody
This page belongs to User:TheDeadBody. You must ask for permission if you want to edit the page. You can fix spelling mistakes though. And if any categories are forgotten, then feel free to add them. Thank you for reading this.

Smile Dog is a fan made easteregg in Abandoned Discovery Island.

He appears as the original Smile Dog, which is from the creepypasta, but the only difference is that he has no eyes.

Starting in Night 4, Smile Dog can rarely appear at your office in a random time. Shut off the power to survive, or else Smile Dog will kill you with his killscreen, which will crash your game. 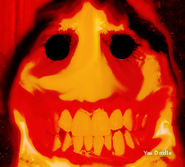 Smile Dog's Killscreen, which will crash your game.
Community content is available under CC-BY-SA unless otherwise noted.
Advertisement