NowDoYourHomieShake
Spike is an fan made easter egg character in Abandoned: Discovery Island.

A literal spike, that's it.

How to activate Spike.

In order to activate Spike, the player has to press a hidden lever somewhere in the Meat Freezer, completing the first step. Activating the lever also unlocks a secret phone call on Night 3.

(The phone call will not be unlocked if the player activates the secret phone call on Night 4 and above, the player must do this on Night 1 or 2 to unlock it. But this is not required to activate Spike.)

After the player activates the hidden lever, the player must also click on a box with a label saying "Dangerous Spikes Inside." Which can only be summoned in the Lounge and the Meat Freezer, clicking on it will activate Spike. The player can only activate Spike once per night.

"We attend to have issues with employees placing objects into the wrong places, like one time. One of our employees placed a literal spike in front of the office, we had to instantly remove it before anybody got hurt." -Greg on Night 3 mentioning an employee placing Spike in the office from the secret phone call.

Spike can appear at any location, if Spike appears in the office, the player has two choices, to put it away or impale itself. Choosing to put away Spike will instantly send it to Pirate Caverns, where it is only seen where Undying is at, it will not appear on special nights due to it being placed away.

If the player chooses to impale itself with it, it will instantly get a game over, with Spike on the screen and Photo-Negative Mickey facepalming on the right. 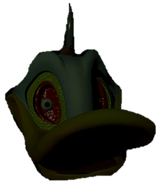 Nightmare Disembodied from Five Nights at Treasure Island, the one Disembodied and Spike are trying to reference. (Image by User:CrimtheMonkey)
Community content is available under CC-BY-SA unless otherwise noted.
Advertisement