Steamboat Mickey is a fanmade antagonist in Abandoned: Discovery Island.

He looks like Epic Mickey, but he has no gloves, he is greyscale, his buttons are more round, and he wears his Steamboat hat.

Steamboat Mickey starts in Character Prep 2 inside of the box on the table, then he crawls out of the box and goes to the Staff Area, then the Meat Freezer, then finally the Office, then he will play a low pitched and slowed version of the Steamboat Willie whistle, the player must shut off a camera to make him go away, If failing or neglecting, he will jumpscare the player.

Steamboat Mickey's audio while he is in the Office. 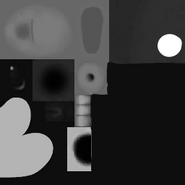 The original Mickey from Steamboat Willie.