The Purple Bunny
Subject_666 is a Photoshop fan made Mouse in Abandoned Discovery island, He appears on Night 666

He appears to Closely Resemble Mickey Mouse, However he is Fully Red And cannot wait till your dead! 😈

The Devil Was Rotting in his own hell, Until a Mouse Scoured across his throne, The Devil stomped on the poor mouse, The Devils Power Fused with this Mouse, And it Transformed into a Terrible Abomination The Devil spilled a bottle of Ink on it by accident and it started Transforming into a toon, The toon Risen from Underground and onto Treasure island, Hiding, Waiting, Laughing, He was than Let loose and The Story of Night 666 Begins...

The Player will Encounter a Red Eyed Mickey on the menu screen after beating Night 8, Click on His nose and Night 666 will Begin, There will be a minigame Cutscene with the Devil Walking Towards a Big Metal Door, The Door will open, And Subject_666 will Come Out, The Player will be put in a dark Photo Negative office, In this Night, The player will have to Shine there Flashlight around the Office, and Will also have to Hide Once Your Flashlight Battery Runs out, If you hide After it runs out than it will Recharge letting you be able to shine it at Subject_666 again, Be careful Though! Subject_666 is able to cause Hallucinations Of himself all over the place Tricking the player, Cameras will be Disabled On this night

The Photo Negative office (Light on)

The Photo Negative office (Light off) 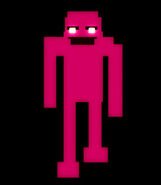 Not Important, But a Spare Image I Found in My files
Community content is available under CC-BY-SA unless otherwise noted.
Advertisement