The Angel AKA Angel is a fanmade antagonist in Abandoned Discovery Island.

The Angel is a White Mickey Suit with with a missing left ear and a broken right ear along with a damaged left leg and no eyes. In some images he's depicted with eye sockets similar to MickMick and with black color with a chunk of head missing or no ears.

He starts at Night 2 and first spawns in Character Prep 1 then at 3AM it goes to Storage, Broadcasting Room, Bathrooms, Meat Freezer, Lounge then the Office. When the Angel is in the office you won't notice because it's invisibly hiding on the right side far away. You have 3 seconds to hide under the desk before it jumpscares you with it's killscreen receiving a game over instead of the game crashing.

He is similar to Ghost Mickey, Ghost Mouse and White Mouse

It is a mix between a Mickey Suit and a fallen angel which is more commonly known as a demon, ghost or spirit.

This is VisnhutheCat3000's first character.

He is a hard character in the game because you don't notice him enter the office and he gives you 3 seconds.

He can't speak but can make noises but only in his jumpscare.

His model is MickMick from a 3D model website screenshooted and edited.

You can use my character without permission but just don't claim him as your own because he belongs to me.

Also don't vandalise my page. I never been vandalised before but that's a warning!!!!!

Angel in Lounge (Notice the eyes)

Angel in Office (can you spot him) 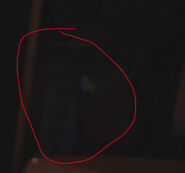 Close up brightened image of the Angel