The Concept is a fan-made easteregg in Abandoned: Discovery Island.

The Concept, also known as Original Photo-Negative Minnie, looks like that of the actual Minnie Mouse, except her colors are inverted.

The Concept may rarely and randomly appear on any camera for a split second, before shutting off the camera. 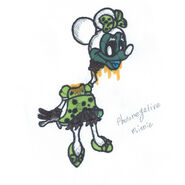 The original fan-art of Photo-Negative Minnie.
Community content is available under CC-BY-SA unless otherwise noted.