"You will pay for everything you have done"

The face is a distorted version of Mickey mouse, that changes appearance in Night 8. He's the Same character from previous nights, just that with a different style.

Basically the face is the same character from previous nights , just that is slightly changed. His appearance is mainly the same, nothing changed so much, the only difference is that he seems to be slightly different overall and his distorted ears and eyeholes have a slightly different form. Also, he only has one eye, and is green, instead of blue. Also he seems to be pouring ink from his both eyeholes and mouth, unlike the Normal face. The way of the buttons is also different, and he has way different textures.

Instead of appearing in the roof, he starts in the storage room and then he goes to the lounge, and then he enters into the office. He first won't be seen in the Storage room, he will be hidden behind the boxes. Then, previously to leave the storage room he will appear crawling in it. He doesn't appear in any other cameras. But he can rarely appear in the bathroom. Then, he will be seen in the lounge, crawling to the door, and he finally will appear in the office. He appears peeking from the right side of the office, being barely visible. That's a difficult to the player, since he can be very difficult to see and then he can easily kill you. You have to hide under the desk, otherwise he will kill you. Shutting off a camera or the power will not work on him. He hasn't got a Shade. He starts at 2AM.

He starts in the storage room, and then he goes to the Lounge. And finally the Office. He can also rarely appear in the Bathroom. 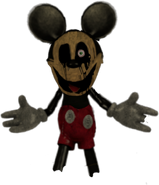 The Face full body in Night 8.

The Face's teaser for Night 8.
Community content is available under CC-BY-SA unless otherwise noted.
Advertisement