initial cutscene as a easter egg

turn off a camera

The Farter is a secondary antagonist of Abandoned discovery island

He is a Mickey shaped character made out of farts and with poop all over his body,red eyes,and gloves and boots similar to mickey mouse

The farter will start in the bathroom camera and he'll make it's way towards your office,if you see him turn off a camera,if you don't them he'll jumpscare you.While Moving he will make random Fart Noises.

farter in the bathroom

farter in the meat freezer

farter in the lounge

farter in the office 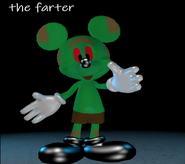 The Farter in Extras (FNwTF)
Community content is available under CC-BY-SA unless otherwise noted.
Advertisement