Abandoned: Discovery Island RP Wikia
Register
Don't have an account?
Sign In
Advertisement
in: Fan Made Characters, Fan Made Suits, Fan Made Toons,
and 23 more

The Infamy is a fan-made antagonist in Abandoned Discovery Island.

This suit is a mysterious mixture/fusion of certain suits. It was told after the destruction of Treasure Island a scientist collected the destroyed suits and created a whole new being, a monster. His other aliases were as called...

He starts in the Void, the Hallway and the Office. The player has to hide under their desk to get rid of him.

There were theories floating around the work place that the suit killed it's creator as well as it secretly living in the Discovery Island Facility.

A screenshot of Night ? 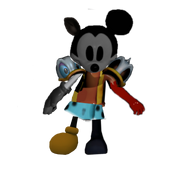