Abandoned: Discovery Island RP Wikia
Register
Don't have an account?
Sign In
Advertisement
in: Fan Made Characters, Ghosts, Fan Made Ghosts,
and 7 more

The Lost Child is a fan-made antagonist in Abandoned: Discovery Island.

Hide underneath the desk

The Lost Child resembles a fully greyscale spirit resembling Mickey Mouse with various different features. He is missing arms, however his gloves are floating as if he still had arms. He has a permanent saddened expression, with a mix of blood and bile leaking out of his eyes. His midsection is also cutoff, and he lacks legs.

The Lost Child was a 6 year old child that got lost at Discovery Island while it was still open. He got separated from his mother when he heard a hushed, perverted, but perfectly executed Mickey Mouse voice come from the Meat Freezer calling to him. His mother wasn't paying attention when this was happening, but little did they know this would be the last time they ever saw each other again. It is unknown what happened to the child after he was called into the Meat Freezer, as the camera in the room was deliberately disabled by an unknown individual. The police were sickened when they arrived at the scene, there was blood, an unknown yellow fluid, a sledgehammer covered in blood, and viscera in one of the refrigerators in the Meat Freezer. Along with this, a message that read "ABANDONED BY GOD" was written crudely in blood on one of the walls. No matter how much the police tried, they could not get a lead on who could have done this, as the DNA on the sledgehammer's handle appeared to be inhuman. Nowadays, the SSA sometimes feel a cold presence when they enter the Meat Freezer, as if someone is watching them. They also sometimes feel like they hear the sound of a crying child throughout the rooms in the building, begging to see their mother, and to return home. 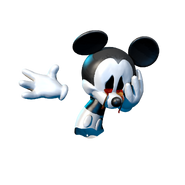 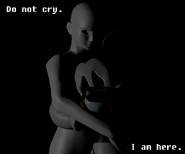 A teaser featuring The Lost Child, where he is being consoled by God.