Abandoned: Discovery Island RP Wikia
Register
Don't have an account?
Sign In
Advertisement
in: Fan Made Suits, Fan Made Characters, Male,
and 22 more

The Mascot of Abominations (M.O.A)

The Mascot of Abominations

The Mascot of Abominations is a Fanmade character in Abandoned: Discovery Island.

The Mascot of Abominations is an Abomination Mascot Costume that has the heads of Oswald, Donald, Photo-Negative Mickey, and Willy attached to the arms and a head of the costume.

His appearance seems to be damaged, but that's okay.

He will start in the Storage Room, Then he becomes active at 2 AM. He will move to the Staff Area, Meat Freezer, and then The Office.

The Player needs to Hide under the Desk or Shut off a Camera to get rid of M.O.A in the office. Failing or Neglecting to get rid of him, He will jumpscare the player, resulting in a game over.

"Where do you think you're going?"

"You're not supposed to be here."

(sometimes you can hear his static noises while he's moving.)

The First Render of M.O.A.

The Second Render of M.O.A.

M.O.A in the Storage Room.

M.O.A in the Staff Area.

M.O.A in the Meat Freezer.

M.O.A in the Office.

The Jumpscare Animation of The M.O.A. 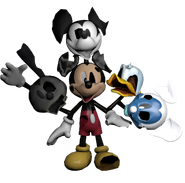 The M.O.A's Full Body Render in a Transparent Background.

#1. He was inspired by The Box of Abominations from Dormitabis.

#2. The reason why he has many heads, It's because someone has hyperglued the heads onto him or something.

#3. When he makes static noises while moving, It sounds like something from an old Angry Grandpa video which is called "The Spirit Box".

#4 His jumpscare sound is a mix of Anniversary PNM's screech, FNaTI: SCRAPPED character's scream, and other.