This page belongs to the User:Un Invert Mickey, you can not edit this page until you get the Permission of the creator/owner of this particular page. Edits with no permission will be re-done and a warning will be given. Thank you for reading!

Triggerglass is a fan-made easter egg, inside joke, and character in Abandoned: Discovery Island.

His appearance is that of Hourglass' with an unreadable expression.

His behavior is reminiscent of Golden Freddy in FNaF 1. Triggerglass will be occasionally seen in the Staff Area, staring at the camera. If the player puts the monitor down after seeing him, he will appear in the office. If the player does not use any of their defenses within 5 seconds, he will jumpscare the player. This does not kill, but will temporarily disable use of the monitor for about 3 seconds, forcing them to resort to either cutting the power or hiding if a toon arrives; this leaves them vulnerable to Classic Oswald and to an extent Undying. 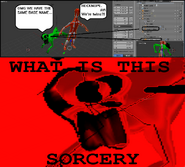