Hide under the desk

TugBoat Minnie is an fan-made antagonist in Abandoned: Discovery Island.

TugBoat Minnie starts from Night 3. She starts in Character Prep 1 off-screen. Then, she will appear as a sign that she is active. Then, she will walk to the Staff Area, Meat Freezer and lastly, the Office. She will also walk to the Bathroom rarely. If she's at the Office, the Player must hide under the desk to get rid of her. Failing or neglecting to do so will result in a jumpscare and a game-over.

She is just like the other Minnie's, except that she has the head of TugBoat Willy. 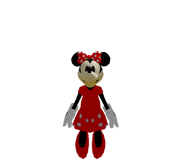