Uncanny Mouse is a fanmade character in Abandoned: Discovery Island.

Hide under the desk

He seems to be a normal Mickey Mouse suit from the theme parks, however, he is grayscale, kind of like Suicide Mouse, but he is way more grayscale than him, his mouth his closed, and he has a blank expression.

Uncanny Mouse starts in Character Prep 1, then he goes to the Staff Area, Meat Freezer, Lounge, and finally the office. The player must hide under the desk to make him go away, neglecting or failing will make him jumpscare the player. 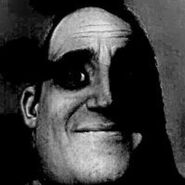 The third phase from the meme, who Uncanny Mouse is based off of.
Community content is available under CC-BY-SA unless otherwise noted.
Advertisement