Undistorted Mickey or Original Face is a fanmade antagonist in Abandoned: Discovery Island.

He is The Face but his face is not distorted and looks like the Modern Cartoon Mickey mouse but without legs.

He first starts in the roof but unseen because he doesn't want to show up unlike his distorted counterpart.

At 1AM he shows up in the office hiding under the desk. The player has to hide to so Undistorted Mickey can leave because he's kinda shy of been seen by you.

Shutting a camera also works but you can either do those two in atleast 10 seconds. 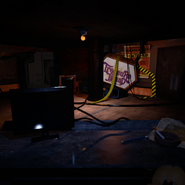 Undistorted Mickey in the Office.