Unknown Entity (A.K.A Phantom Renderman) is a mysterious suit and easter egg in Abandoned: Discovery Island.

Unknown Entity looks similar to Renderman, except that he has Blockmongler face, and it's red.

Unknown Entity resembles to be Flippy suit, but fully black and has red eyes.

He serves as the final boss in this night. He mimicks many character movements, making this night harder than expected, but the mechanics are easy. Once he is at the doorways, the player must shut off any camera in order to fend him off. If he is at the sign, they must stand still to make him leave. If he is close to the desk, they must hide under the desk to stop him. If he is at the monitor, which shows his face, they must shut off the power to repel him. He moves on every locations, and sometimes glitches the cameras. If they failed to defend against him, he will jumpscare the player, eventually crashing the game.

He randomly spawns at the Broadcasting Room, making an ambient noise, to signal the player that he is active. He will roam around the Island, making the cameras darker, which only his face can be seen. Once he entered The Office, the player must shut off CAM 7 to get rid of him. Failing will result in a jumpscare, and eventually crash the game.

Randomly, during Night 6, the player might encounter glowing eyes on any cameras, which means that he is active. He enters every locations, making the cameras darker. If he entered your office, you must hide under the desk for about five seconds to make him leave. Delaying or not doing so will cause him to disable the power for the rest of the night. However, he can be also active during power off. If they encounter him, they must shine their light to make him go away. Not doing so will result in a jumpscare, and eventually crash the game. 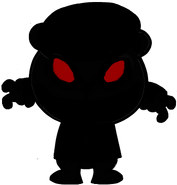 Unknown Entity's original appearance prior to the Post-Halloween Update.
Community content is available under CC-BY-SA unless otherwise noted.
Advertisement