View source
watch 01:54
Obi-Wan Finale - The Loop
Do you like this video?
Play Sound

Venomous MickMick is a fanmade antagonist in Abandoned Discovery Island. He is a toxic acidic venomous version of MickMick created by VisnhutheCat3000.

Hide under the desk or shut off the power

This is MickMick but he has a greenish color because he is filled with venom and has little red posion parts along with missing both ears, red eyes and a glowing look. He also has small snakes and posion frogs shoved in the suit along with Henry's toxic burnt corpse and thick yellow acidic toxic poisoning blood but it's not seen in his promo or gameplay.

He activates early at 12am in Night 5 in Staff Area before he heads to Character Prep 2 to Meat Freezer, Lounge then the Office. When he's in his head will be inside And he doesn't have any jumpscares, However when he's in there A bite teeth mouth icon with a bite stock sound will appear meaning that he's injecting his snake venom into you.

The icon will keep on repeating itself as it increases in size and the stock sound gets louder and louder until when it's rapidly increased and loud, you die with no jumpscare.

So try not to get caught in his bite. Try to hide under the desk or shut off the power because he has no shade. Shutting off cams will not work because he's missing ears making him deaf. 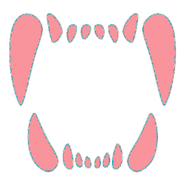