Wajin resembles an alternate version of Willy. Wajin's body is a bright purplish-blue color, with what appears to be hollow black squinting eyes. He always appears in the same position, right leg standing still, the other being bent. His torso being slightly hunched over, with his mouth always being open. His left arm is bent upwards, with his hand always facing up, with the pointer finger pointing.

Wajin is a non-canon easter egg that can occur on any night, at any time. Wajin will appear in the Offiice, standing in front of the desk. The entire room will be illuminated the same bright blue-purple color that appears on Wajin's body. A laugh will be audible, and a slowed down, reverberated version of Sonic CD's game over music will play. During this, hallucinations will flash on-screen, and attempt to disorient the player. Wajin's appearance is entirely harmless, and will simply go away if the player flips up the camera monitor or hides underneath their desk. 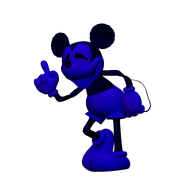 Wajin in the Office.