'''This Page belongs to MinionPapoy'

Thank you for reading!

The Roof, The Sewers, Office.

Withered Farter is a Distorted Mickey shaped character made out of farts and with poop all over his body, red empty eyes, and gloves similar to Mickey Mouse. His face is distorted, he has no eyes, and he has no legs.

Withered Farter active in Night 3 or Night 2 (Rarely). He will start in The Roof, The Sewers (Rarely), and Finally the Office. If he in the Office, the player must shut off the camera, Hide under the desk, or shut off the power or else he will jumpscaring the player and the result is Game Over. 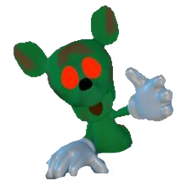