Abandoned: Discovery Island RP Wikia
Register
Don't have an account?
Sign In
Advertisement
in: Fan Made Characters, Fan Made Suits, Fan Made Toons,
and 13 more

Withered Mickey is a fan-made antagonist in Abandoned: Discovery Island.

Withered Mickey is a severely destroyed Mickey Mouse suit, with a large chunk taken out of the right side of his head, and his left ear is bent and crooked. His lower jaw is stretched downward, and he is missing his left eye entirely. His right eye is slightly stretcged, and the pupil is small and dilated. Withered Mickey's body has several small chunks taken out of it, and he is missing the entirety of his left arm. The left button on his shorts is missing, while the right one is busted. Lastly, his right shoe has a large piece taken out of it.

Withered Mickey starts off-camera in the Caverns Entrance off-camera. When active, he is seen standing in the middle of the room, staring into the camera. At this point, Withered Mickey can move to any camera on the island, except for the Roof. Withered Mickey's behavior is completely sporatic, but moves slowly to level out the difficulty. When he appears in the office, he will be seen standing at the center of the desk with his hand outstretched. The player must shut off the power to get rid of him, as failing to do so will result in a jumpscare. 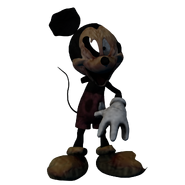 Withered Mickey in the office.